The Boccara Gallery presents a tapestry woven by the Tabard workshop, in Aubusson in 1962. An identical copy can be found at the Château d’Apremont.

The meeting with Jean Lurçat in September 1941 had a decisive impact on the fate of Dom Robert as a tapestry cartoon designer.

“I had the impression from this brief contact to work beside a big brother who did not keep any secret boot. He showed me his samples of wool, (…) I learned the use of threshing for interpenetration of colors and all kinds of possibilities to make the most of this warm matter. Let’s say, the simplest classic vocabulary to achieve the most eloquent effects».

The woven work of Dom Robert includes nearly one hundred and fifty original cartoons, mostly woven in Aubusson. Around forty in the Tabard workshops between 1941 and 1980, including L’Esté, Dom Robert’s first tapestry. A hundred in the Goubely workshop between 1955 and 1994. One piece, Terriblilis for the Notre-Dame church in Dijon, was woven by the Mobilier National in Beauvais. A few rare cartoons with private workshops in England (Ronald Cruickshank) and in France (Cauquil- Prince, Novion / Tehery, Delaye, J.Dassonval) complete his work. Tapestries are often published in many copies and are mostly in private collections. Public (a school, a high school, a town hall) and private (corporate headquarters) buildings also have Dom Robert tapestries as well as some museum collections: Paris Museum of Modern Art, Les Gobelins, Dijon Museum, Angers Museum, City of Aubusson tapestry museum.

Between 1942 and 1992, Dom Robert created nearly one hundred and fifty tapestry cartoons, some fragments or taken from previous cartoons but still reworked by his hand, most without previous model. The “cardboard” composed of the execution size of the tapestry is placed under the chain of the loom where the weavers follow the exact design. Dom Robert will adopt the numbered cardboard technique developed by Jean Lurçat and will remain faithful: “My cartoons are usually encrypted, that is to say that each color area is indicated by a corresponding conventional number or sign. (…) As far as I am concerned, each color is subdivided into several shades of light to dark and numbered in sequence. In all about forty tones from about 8 basic colors. In addition to these flat colors, I willingly use mixtures of shades which are given the name of chiné, or piqué, obtained by weaving on the same flute the mixture of several threads of different colors. (…) Let us add again the work of hatching or shuffling, more or less long, translated into sawtooth, used to obtain passages of tones and more flexible forms. (Excerpt of Dom Robert’s text “Composition of a tapestry cartoon” in catalog exhibition “The Demeure”, Paris 1974.)

After the first tapestries based on watercolors on the seasonal theme, followed commissions for religious buildings like Terribilis for the Notre-Dame church of Dijon, then Notre-Dame-de-France – for the church of the same name London. In the fifties the human figure, which is present in The Creation of Man and Magnificat, and religious themes disappear permanently from his tapestries. It is the vegetation and wildlife that capture all his attention. And the poetic titles, never illustrative, however, are eloquent of this vein of inspiration. From L’Arbre qui chante (The Singing Tree) in 1950 to L’Herbe Lève (The Grass Rises), last cardboard developed in 1992, through La Vie douce (The Sweet Life), The Children of Light, La Clef des champs (The Musical Key of the Fields) or Ombelles (The Umbels), it’s an original walk that Dom Robert offers us each time and joins his conception of this art:

“In a tapestry we walk … This walk is without a specific goal, we like the stroll. One detail leads you to another, the red leads to the blue. All of a sudden, we discover a bird, a squirrel who wanted to hide, we look for others as we go on to mushrooms, the same pleasure as an undergrowth, a kind of game of hide and seek”. 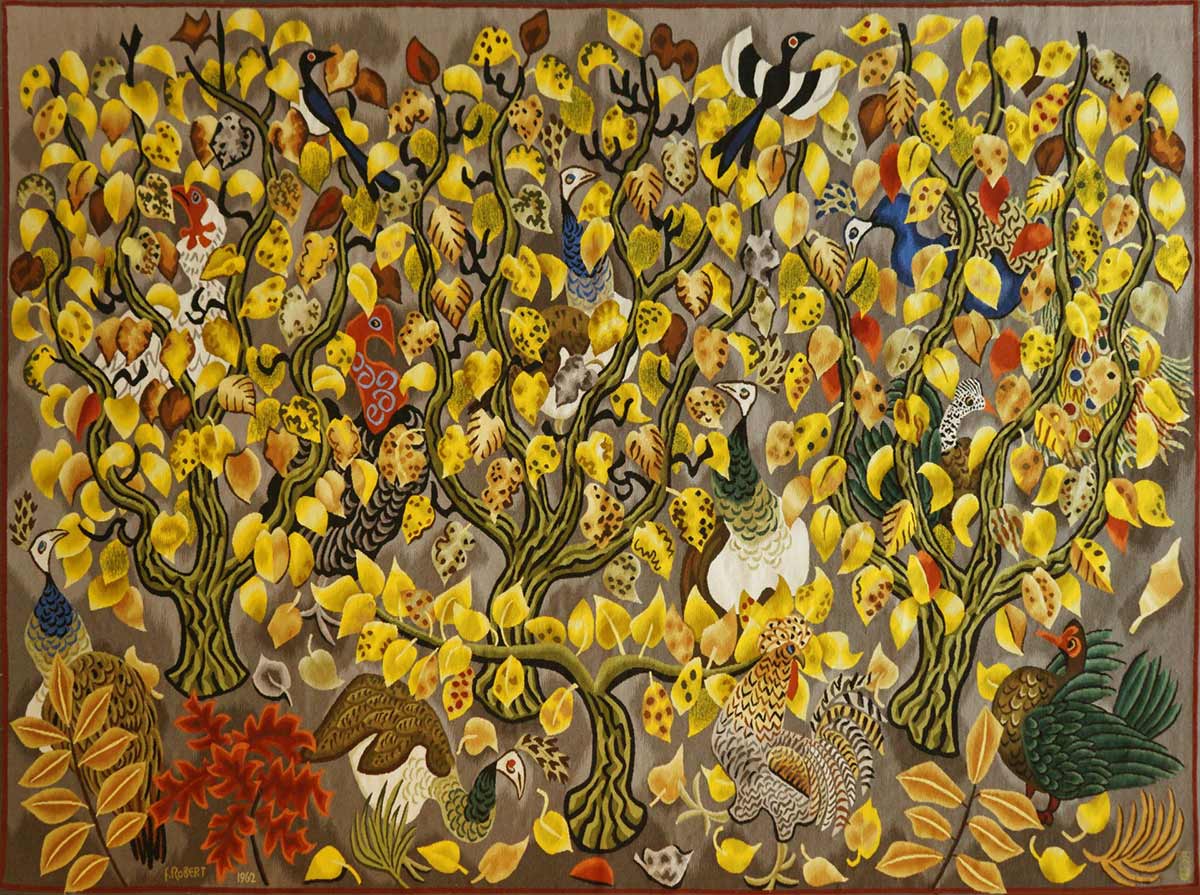