Didier Marien, has been collecting Jean Lurçat’s works for many years. In fact, Didier Marien met Jean Lurçat’s wife, Simone Andrée Marie-Louise Lurçat, and it was through her that he discovered the works of the great artist.  Didier Marien immediately noticed the originality and boldness that distinguish Jean Lurçat and decided to devote a large part of his collection to the artist.

Today the Boccara Gallery presents a remarkable collection of the artist’s work, who propagated an epic, poetic, symbolic and humanistic vision of the 20th century through his works and who has become a key figure in the history of tapestry.  All tapestries of Jean Lurçat are handmade, and every detail is carefully studied.

The Boccara Gallery is pleased to offer a panorama of works by Jean Lurçat, an artist who recently began to be discovered for his undeniable talent and innovative works.

Jean Lurçat is known worldwide for his flamboyant and monumental creations. Jean Lurçat played a great role in the tapestry renewal in the 20th Century. He is considered to be particularly important for his contribution to a workshop boost and many progressive artists getting hired (Dom Robert, Marc Saint-Saëns, Mario Prassinos, Robert Wogensky, Michel Tourlière, Mathieu Matégot etc.), ultimately creating a very strong emulation in Aubusson.

Before looking at his first canvases, the Vosges artist studied painting. Influenced by Matisse, Cézanne and Renoir, he became an apprentice in 1914 to the fresco painter Jean-Paul Lafitte. He then tried his hand at lithography and, from 1920, exhibited two tapestries at the Salon des Indépendants in Paris. Jean Lurçat saw his popularity soar: he created the sets and costumes for several shows, such as ‘Celui qui reçoit des gifles’ (1921) by the Pitoëff company or ‘Jardin public’ (1933) by George Balanchine, and exhibited his work throughout Europe. In 1928, he embarked for the United States and participated five years later in the New York exhibition ‘Selections’ with Matisse, Picasso and Braque.

From 1928 onwards, Lurçat collaborated with Marie Cuttoli, a tapestry lover and art seller. Among such artists as Lucien Couteau, Jean Lurçat, Georges Rouault, Pablo Picasso, Georges Braque, Le Corbusier, Raoul Dufy, Man Ray etc. he created rug designs and the cartoons for tapestry to be woven in Aubusson for Cuttoli.

In 1937, he discovered the innovative work of the Aubusson National School of Decorative Arts, as well as the 16th Century tapestry “d’Anglards-de-Salers”, which made a strong impression on him. The following year, he was deeply affected by the “Apocalypse” tapestry in Angers, which later inspired him to create his perhaps most famous work “The Song of the World” (1957). In 1939, the national Manufactures’ director, Guillaume Jeanneau, entrusted him with the order of a furniture ensemble with tapestry (woven at the Gobelins) and a mission in Aubusson: to find a new genre of decor.

His tapestries with vivid colors have a clearly monumental character, destined to dress up the modern architecture. His symbolic universe plays over the four elements, the vegetal and animal kingdom, the human’s place in the cosmos. The artist puts into frame poetic writings (of Eluard, Aragon, Tzara, Desnos etc.) and claims in his weavings the engagement in the Second World War Resistance. His graphics are very particular and characteristic, and use a number of typical specific motives, such as the sun and the rooster, as key symbols.

In France, more than twenty establishments bear the name of this artist who has restored the nobility of tapestry. 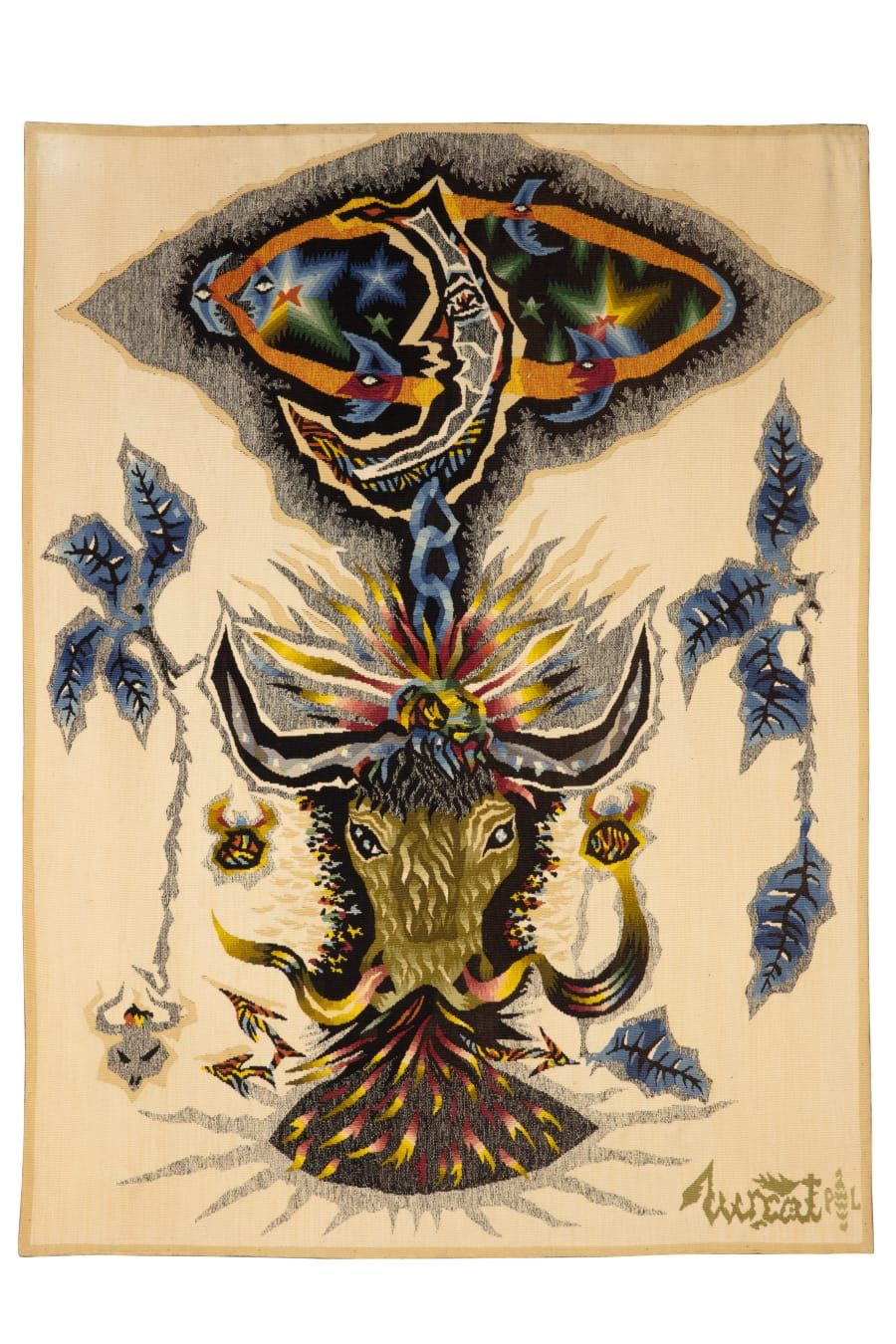 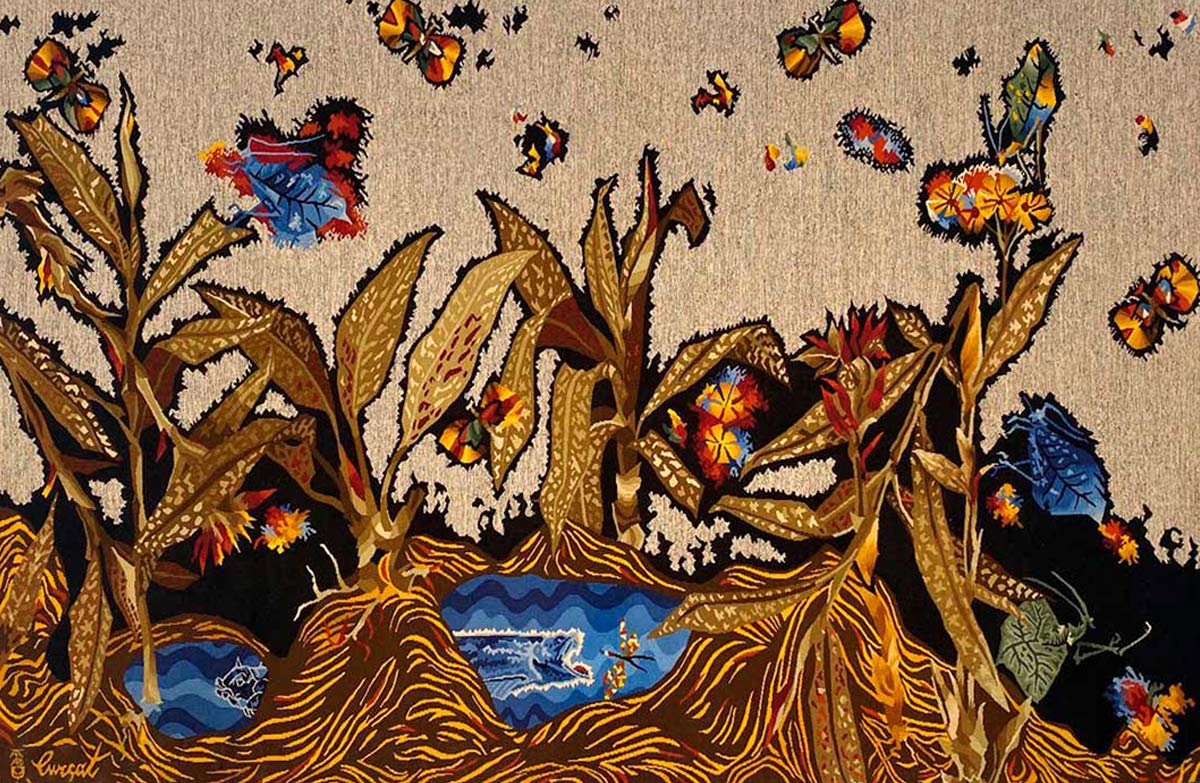 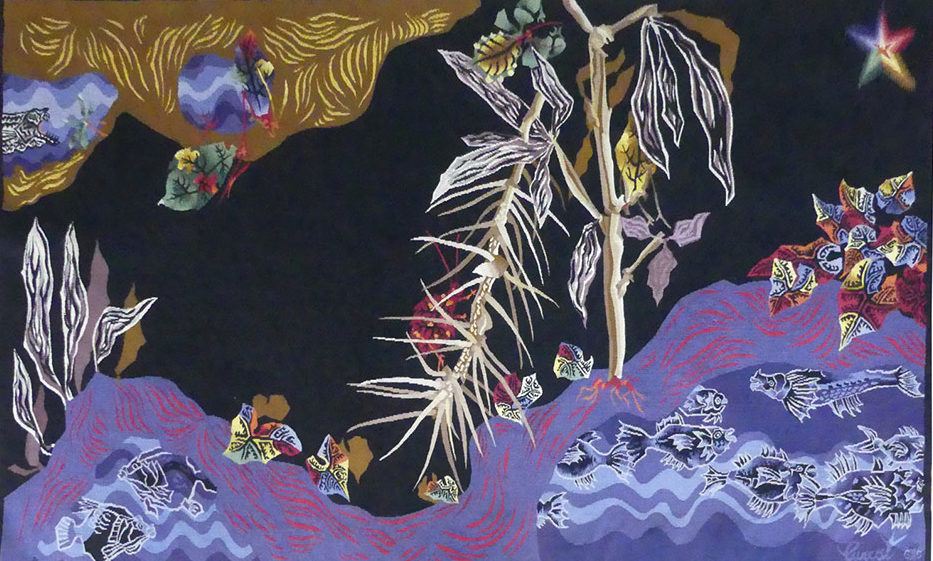 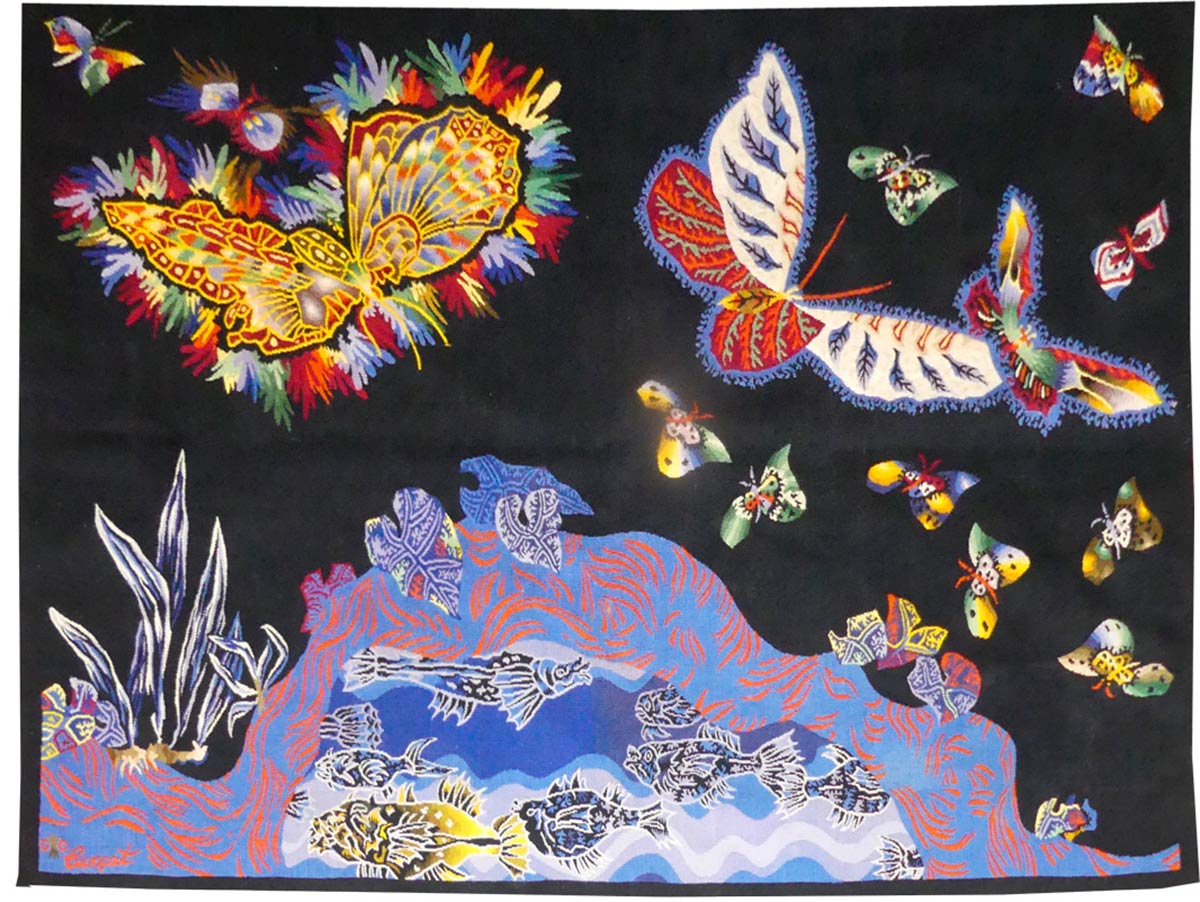 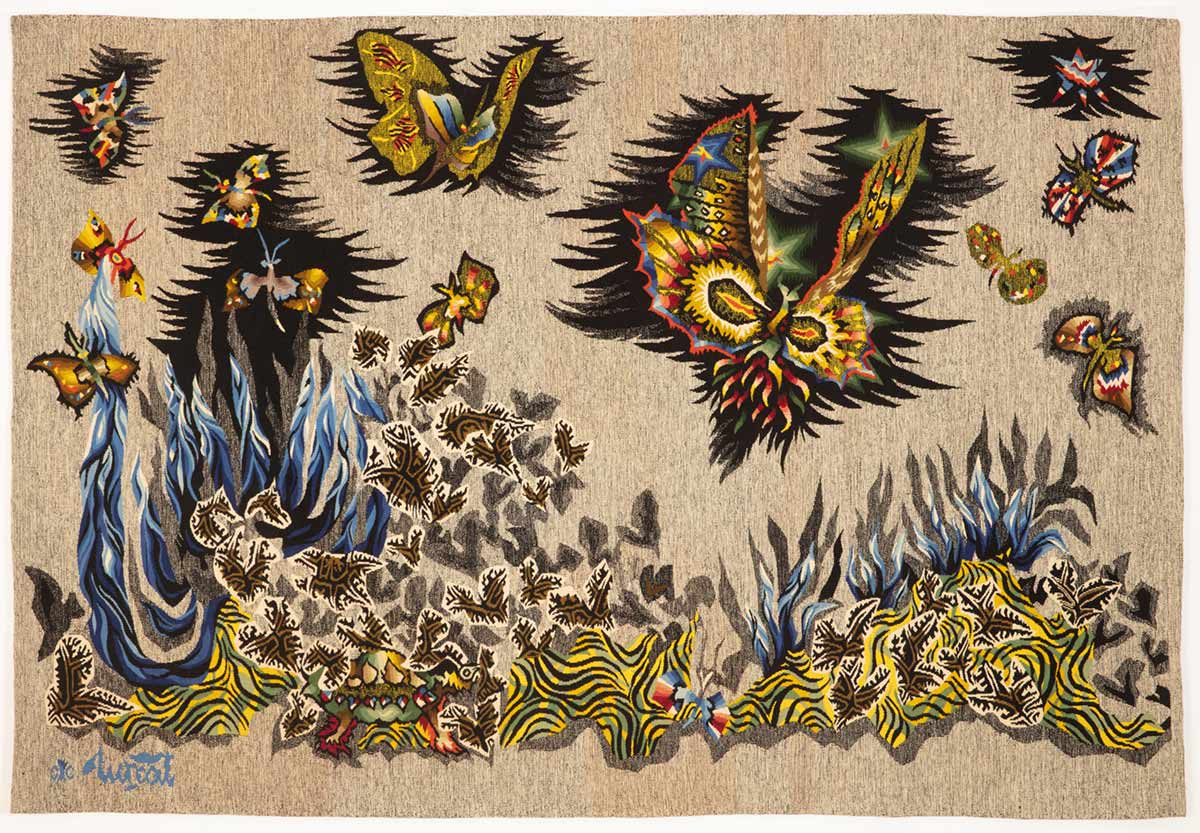 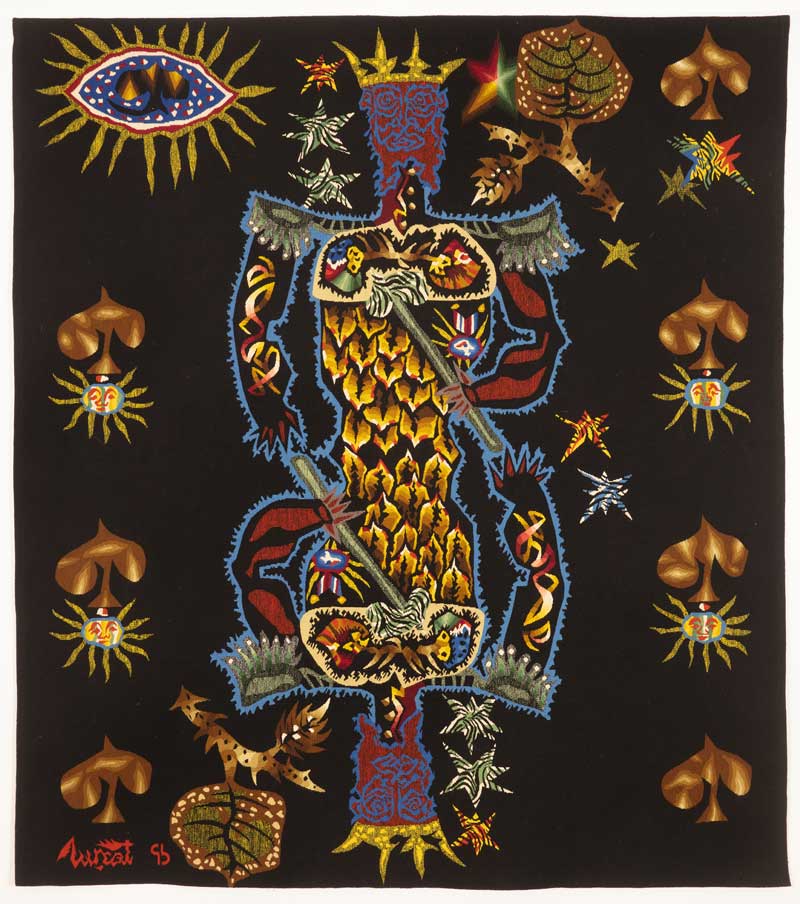 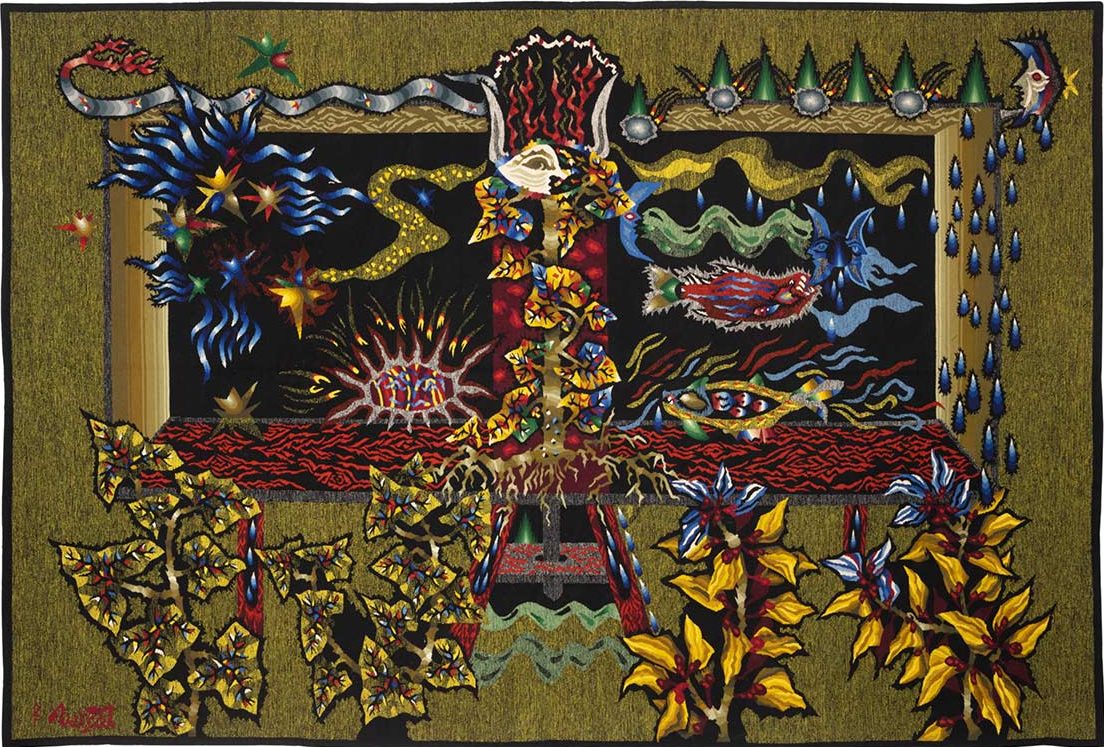 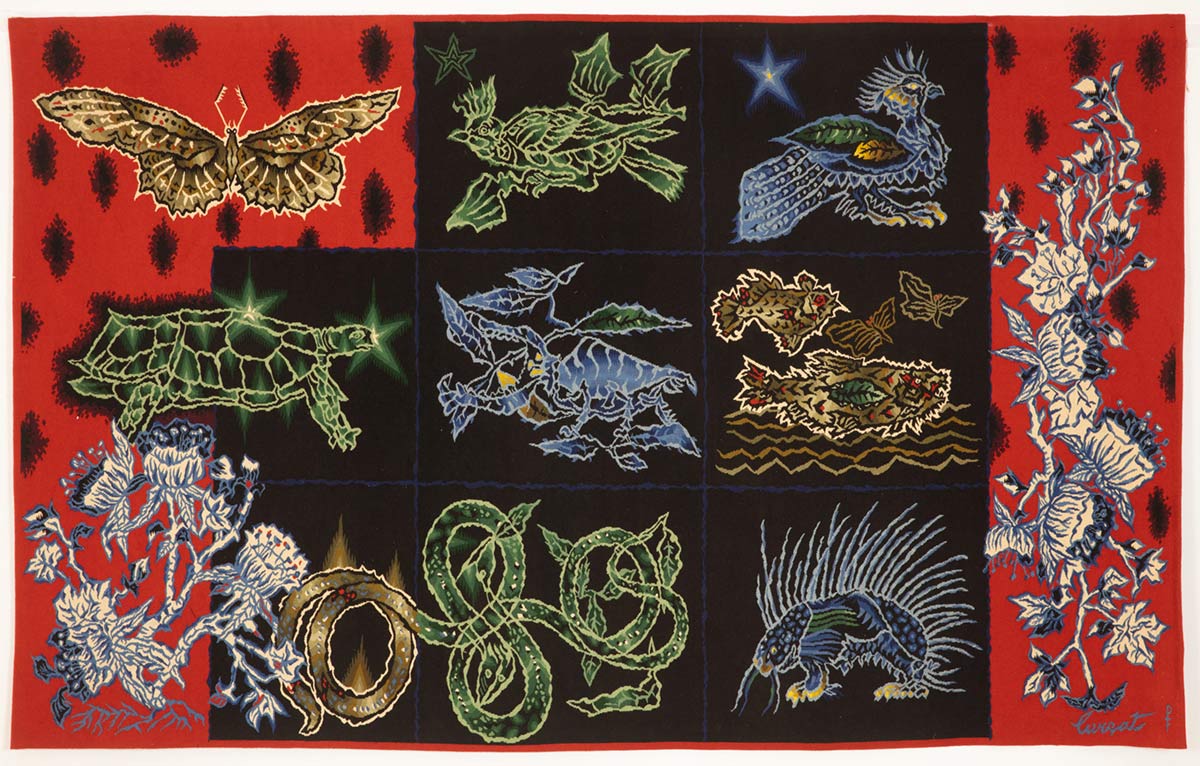 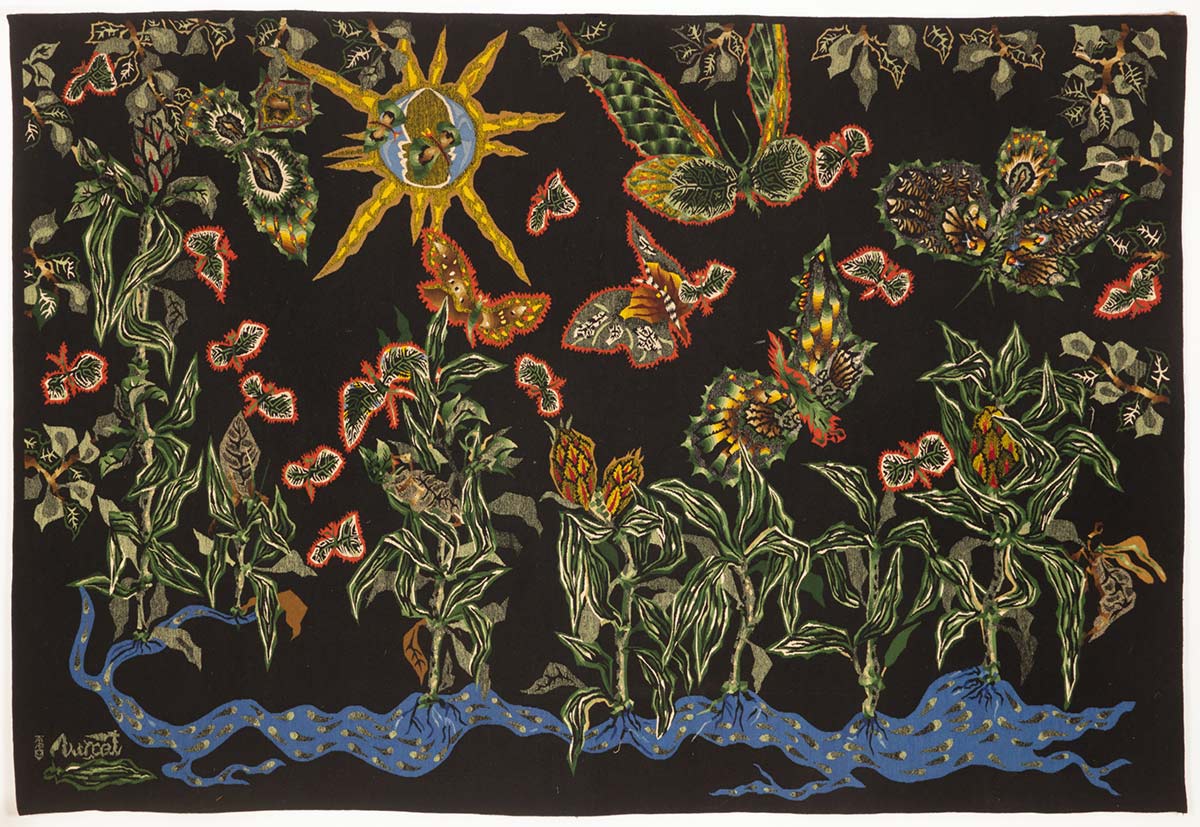 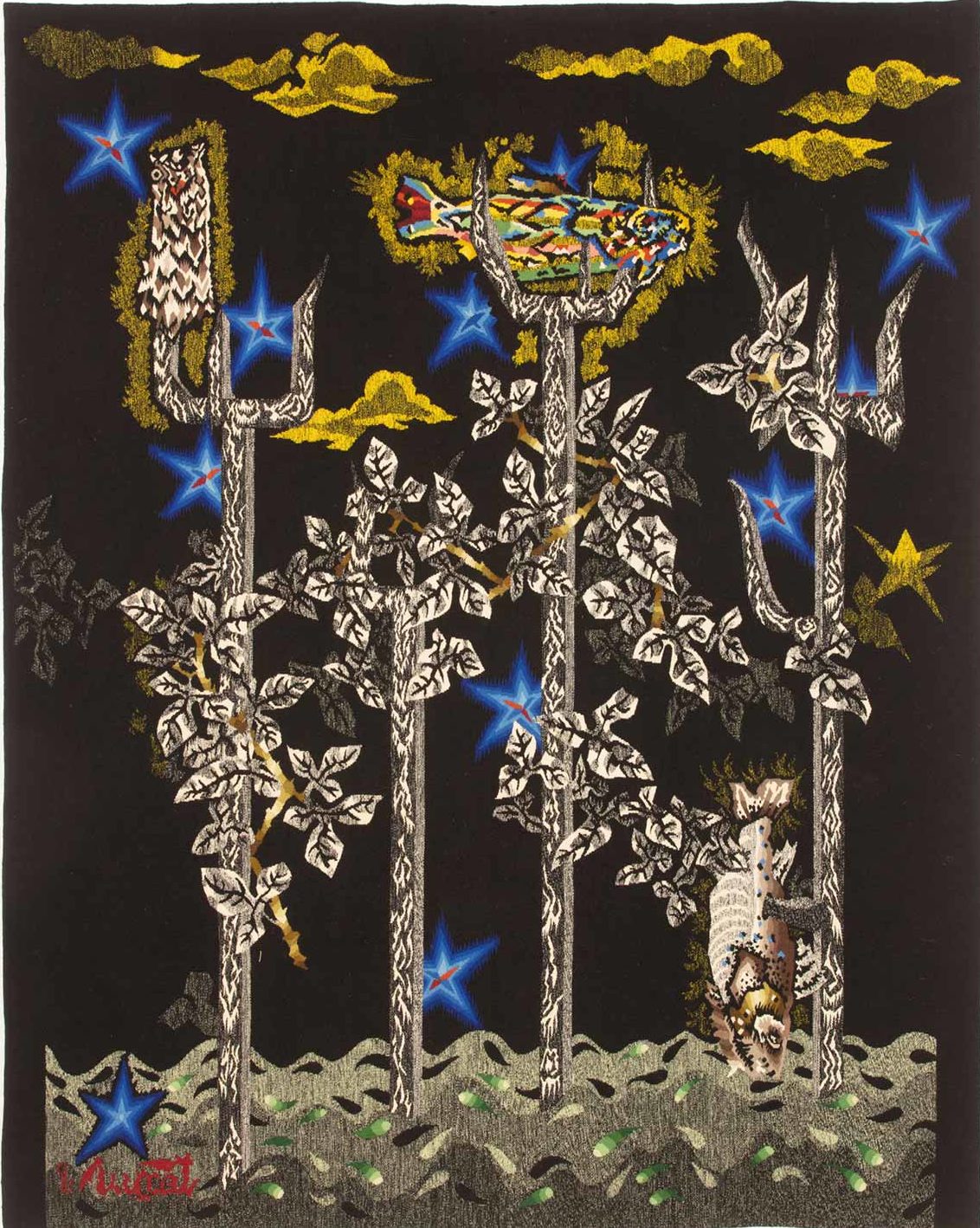 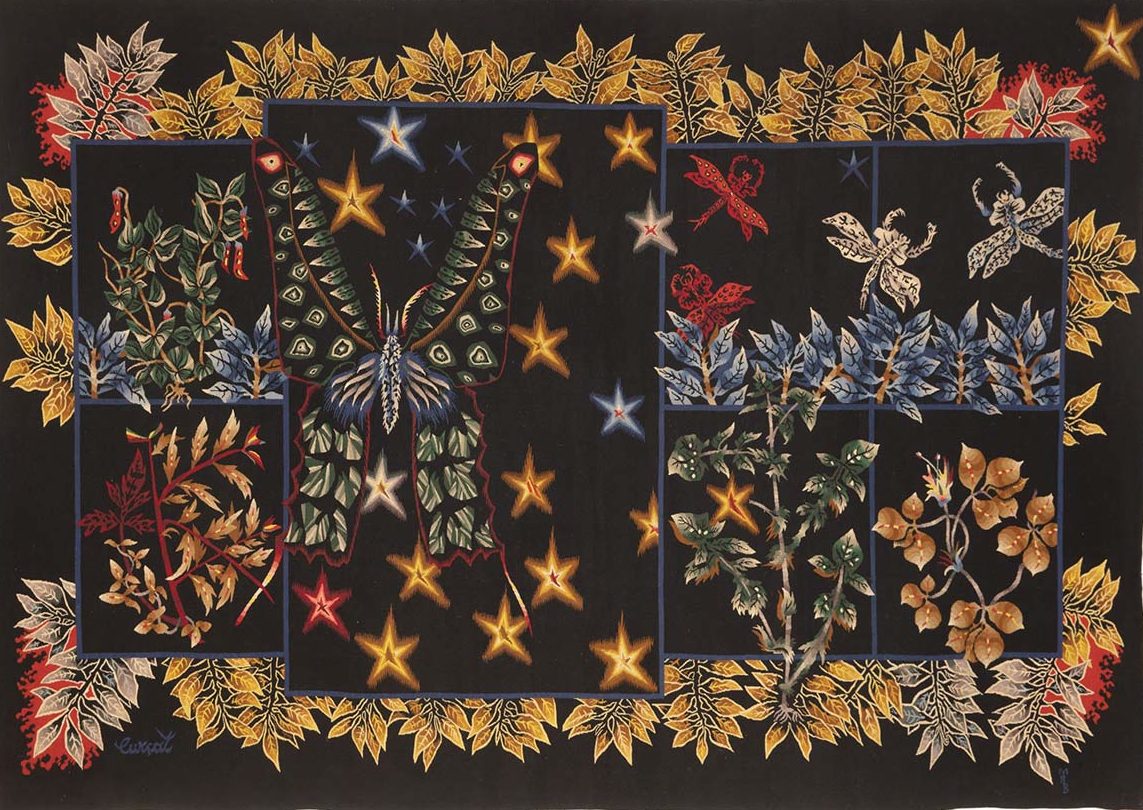 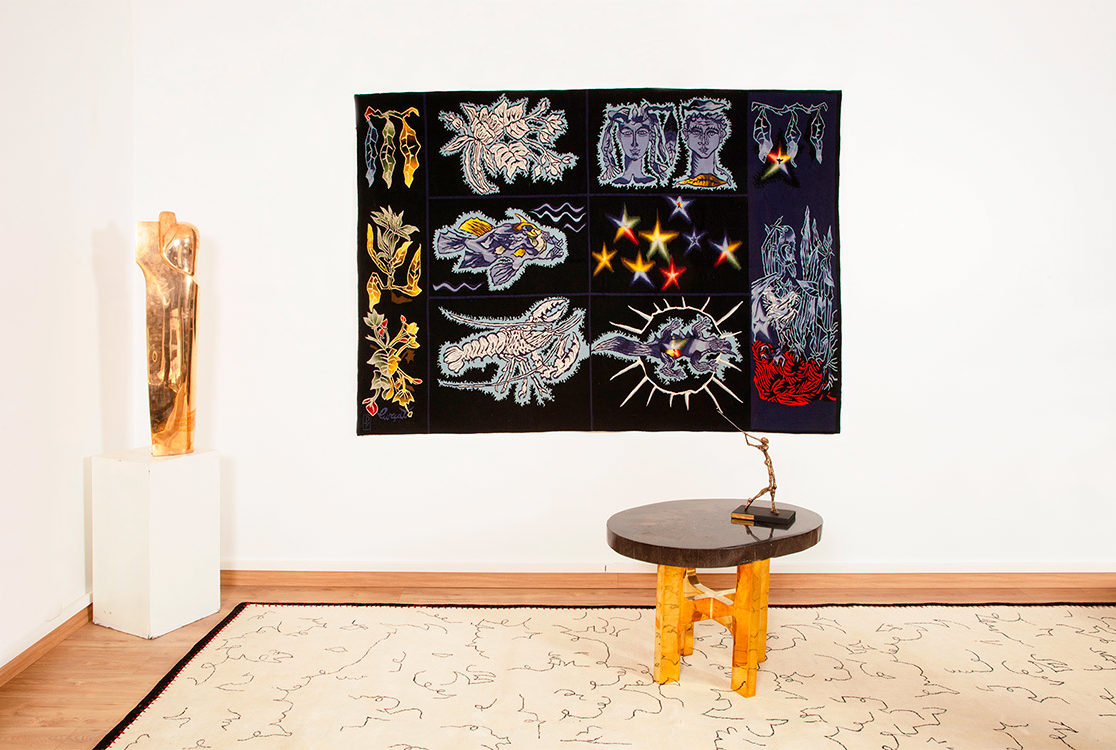 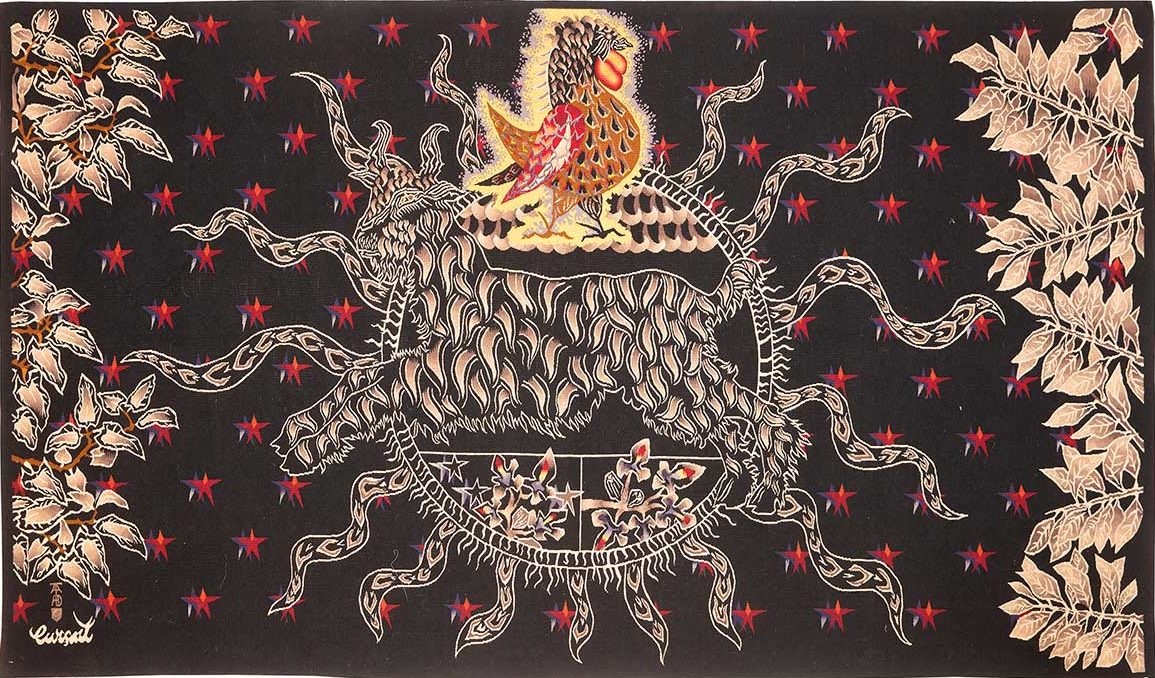