The Boccara Gallery is pleased to count among the artists of its collection Le Corbusier (1887-1965), a highly influential architect, designer, painter, urban planner and writer, a.k.a. “Father of Modernism”. Le Corbusier believed in rationally designed spaces with modern, open interiors and emphasized light. His integral approach to design and architecture dispersed his artistic interest to all domains of applied art, including textiles. According to Le Corbusier, a tapestry, unlike a painting, cannot be perceived as a simple decoration of a wall placed above a furniture piece. It must be placed at human height and “can (or perhaps must) touch the floor”. This way the tapestries can truly become part of the architectural composition beyond mere decoration.

Charles-Edouard Jeanneret, aka Corbusier, an illustrious artist of the 20th century is considered to be the founder of modern architecture. With artisanal and industrial background, Le Corbusier initially did his training in engraving and chiseling, in 1900’s at the Art School in Jura. Self-taught, Le Corbusier became later one of the most versatile and prolific artists of the 20th century: an architect, a town planner, a furniture and tapestry designer, a painter, a sculptor, a poet.

He was born in 1887 in Switzerland and passed away in 1965 in the French Riviera. A Swiss national, he obtained the French citizenship in 1930.

In 1926, he proclaimed the theory of modern architecture based on five pillars: stilts, roof deck, open plan layout, original facade, window sills. Le Corbusier, pioneer of modern architecture and design, rejected the excessive architectural ornament and developed a style that became known as modernism, or constructivism (a.k.a. brutalism), creating buildings with elemental geometric forms that were made of industrial materials such as steel and reinforced concrete.

In 1928, he founded CIAM (International Congress of Modern Architecture) uniting key architects and town planners of the modernist current. In 1945, he created his famous “housing units of standard size” («l’unité de l’habitation de grandeur conforme»). His invention allowed him to combine all key equipment under the same building: nursery, laundromat, swimming pool, school and library.

Early on Le Corbusier rejected cubism as irrational and “romantic”, establishing together with Amédée Ozenfant, a new aesthetic doctrine – purism, where objects were represented as elementary forms devoid of detail. He renounced exuberance and décor, which deteriorate the form and thus need to be eliminated for the sake of geometric purity.

Le Corbusier believed in rationally designed spaces with modern, open interiors and emphasized light. His architecture and interiors are characterized by a sense of space, structural order, proportion and simplicity. Le Corbusier’s furniture objectivates the same ideals. His designs are spare, minimal and efficient.

His integral approach to design and architecture dispersed his artistic interest to all domains of applied art, including textiles.  To him tapestry, which he called “the mural of the modern age,” was a medium in its own right, not simply means to transpose the ideas explored in his paintings and prints.  He stressed the functional quality of these so called “Muralnomads”: their ability to be easily “detached, rolled, carried under one’s arm, and hung elsewhere”.

An eternal wanderer, he has worked in 12 countries, and contributed to the creation of 78 buildings and more than 400 projects, these include villas, workshops and habitations. 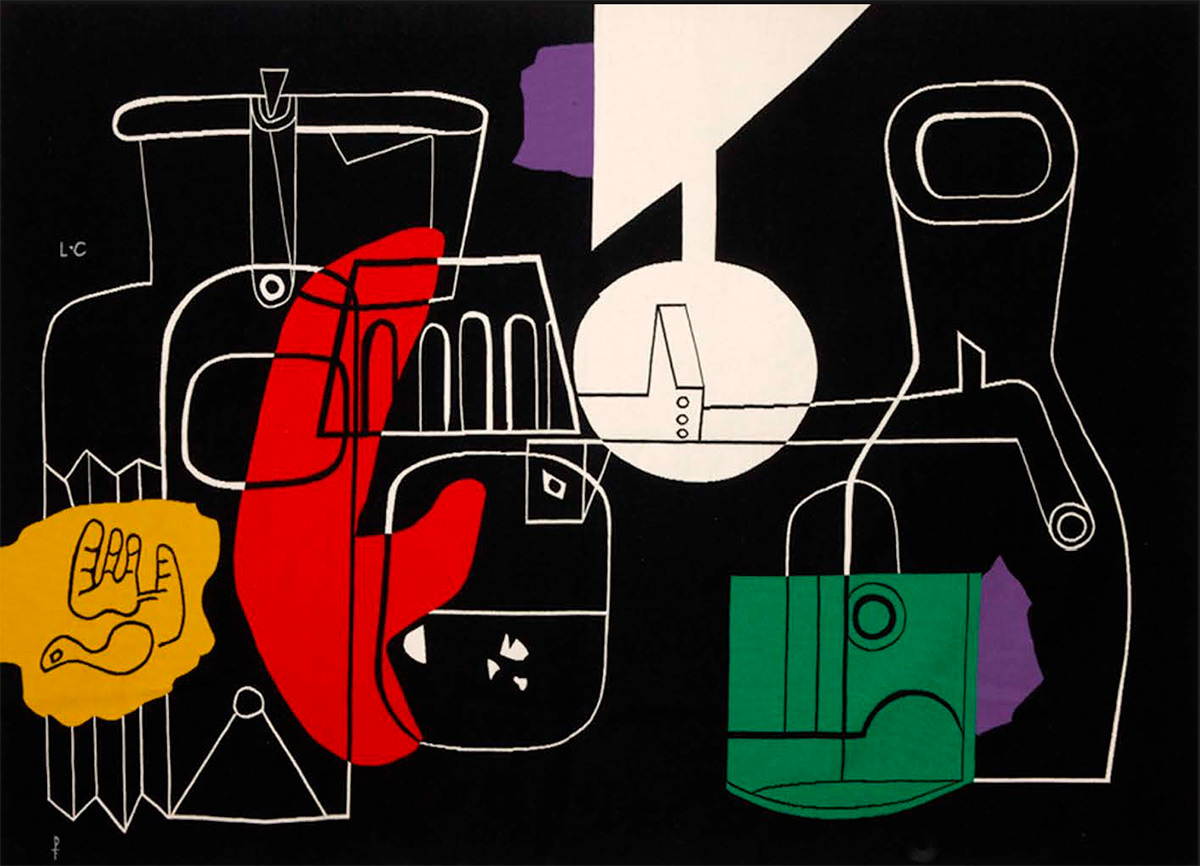