He was the “Artist of the month” in 1982 at the Pretoria Art Museum this was followed in 1987 with his first one man exhibition in the Beuster Skolimowski Gallery in Pretoria and in 1989 another one man exhibition at the SAAA. Since then he has held numerous exhibitions of his sculptures throughout South Africa, in Witrivier, Nelspruit, Pietersburg, Johannesburg, Potchefstroom, Durban, Cape Town, in leading galleries such as the Crake, Kraft, Olivetti, Michaelatos, Beuster Skolimowski, Everard Read and many others. His work has been exhibited in Rome and Milan, Italy. The M-Net Head Office bought large bronze sculptures, and he completed commissioned works for BMW’s head office in Midrand

In 1994 he put 35 sculptures on exhibition in New York at the Grand Central Station as part of the Strengthening the Link initiative to boost trade between South Africa and The United States, organized by SATOUR in conjunction with the Department of Trade and Industry, represented by former president Nelson Mandela. He considers one of the highlights of his career: The Age of Grace, an eight foot high bronze sculpture at the Grand Central Station, which celebrated South African Heritage and was displayed on the front page of The New York Times.

Anton Rupert bought one of Smit’s works for the Rembrandt Foundation. A collection of his work was exhibited during the inauguration of President Nelson Mandela at the Union Buildings in Pretoria in 1994. Nobel laureate Desmond Tutu and ex minister Pik Botha bought some of his sculptures. Anton Smit’s work has been shown and lauded internationally in places as diverse as Rome and Milan, Italy (1991), the Sweeguan Art Gallery in Singapore (1993), Bonn and Wolfsburg in Germany (1994), the SA Embassy in Bonn (1998), Amsterdam (2004) and Cologne (2014).

In 2003 Smit opened his own sculpture garden, at the spectacular Anton Smit Sculpture Park in Aqua Vista, with a breathtaking view of Bronkhorstspruit Dam. In the same year he created the enormous Sandstone Head (2 X 3 meter) for a European art collector.

Other landmark exhibitions and art commissions he completed include the Public Commission National library of Tshwane in Pretoria (2007);

No Second Death exhibition in Franchhoek at the Grande Provance Wine Estate and Gallery (2009); a large sandstone head and other art commissioned by Graff-Delaire Wine Estate (2009);

Facets exhibition and Angels exhibition at the Anton Smit Gallery (2010); Transitions at Anton Smit Gallery and Faith at the Grand Hyatt Regency Hotel and Golf Estate Oubaai (2011); Transcendental Head/Kungwini public sculpture on the R25, a symbol of the new SA (2012); Metal work exhibition in Stellenbosch and The Continuous Redemption of Man at the Gallery on Leviseur, Bloemfontein, Innibos festival in Nelspruit (2013); Art Affair at the Saxon Hotel in Johannesburg (2014),

Transections in the Young Blood gallery in Cape Town and a monumental commission for Menlyn Maine (2014). Anton Smit’s much-anticipated solo sculpture exhibition Reverberating Time was shown at the Youngblood Gallery in Cape Town in March 2014. Half of the pieces in this solo exhibition were displayed for three days, then sent to Germany, where Youngblood Europe was presenting them as part of the world-renowned contemporary art fair, Art Cologne. 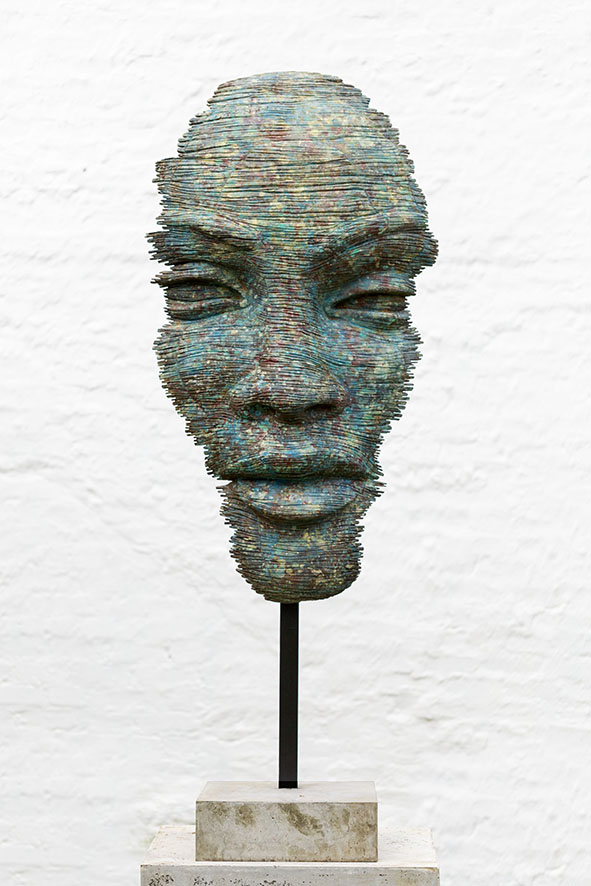