A significant part of the Boccara collection is dedicated to the works of Fernand Léger. Didier Marien has been interested in the works of this artist for a long time.

The way Léger dealt with modern subjects was far ahead of his time and paved the way for contemporary art, which is why the Boccara gallery is so proud to present this artist. Fernand Léger’s tapestries are marked by a graphic use of line, a fascination with machines and flattened figures with no apparent expression.

A prominent French artist, Fernand Leger is known for his work as a painter, illustrator, stage designer, draughtsman, ceramicist and textile designer. His early work was influenced by Impressionism and Fauvism. Later he shifted toward cubism, eventually developing his own style tagged “tubism” by the critics (for the tubular shapes he frequently used). His style is often close to Italian futurism, especially in his series of workers on scaffolds.

Fernand Léger was born on 4 February 1881 in Argentan (Orne, France) and died on 17 August 1955 in Gif-sur-Yvette (Essonne, France). Originally trained as an apprentice in architecture in Caen, Leger set off his artistic career as a draughtsman. Later, Fernand Léger studied in Paris, at the Ecole des Arts Décoratifs, it was then he discovered impressionism and came under its influence for a while.

In October 1907 five of his works were exhibited at the Salon d’automne, where Leger discovered the work of Paul Cézanne. This marked the starting point of his shift towards cubism, as he began working on volumes. Same year he moved to “La Ruche” (artist’s studios in Paris), where he met numerous painters, including Paul Cézanne, Braque and Picasso, and began to shift towards cubism.

Being mobilized during World War I, he drew in trenches; after getting wounded, he was hospitalized and later demobilized. He got married and moved to Vernon. After the war he expanded his work with set designs, book illustration and films.

During the 1920s he had a very productive period: he had numerous commissions and met many artists including Le Corbusier. It was then Leger developed an interest in machinery, speed and movement, and mechanical elements became more and more present in his works. He also started working for the cinema. In the late 1920s he became one of the pioneer artists to create models (“cartoons”) meant specifically for textile design, commissioned by Marie Cuttoli for the Aubusson manufacture.

In 1931, Léger traveled to the United States for the first time, visiting New York City and Chicago. The frantic rhythm of big cities, the American fascination with technological innovations, their love of life had a huge impact on Fernand Leger. The artist especially loved New York and called it “a work of architectural art”.

In 1935, Leger’s first big exhibition was held in Museum of Modern Art in New York.  Several trips later, at the outbreak of World War II, Fernand Leger had to leave for the United States and moved to New York; from 1940 to 1945 he lived permanently in the United States, painting and teaching at Yale university. Many of his friends were also in exile in the US: André Breton, Masson, Tanguy, Ernst, Chagall, Mondrian. The artist’s work was widely popular among American tycoons, and they often commissioned him for monumental works. Among those was a mural commissioned by Nelson A. Rockefeller for his penthouse on 5th Ave. in New York. Another one was created the huge wall painting “Divers” in Long Island.

He returned to France in 1945, where he joined the Communist Party (with Picasso, among others) and found himself affiliated with ideas of realism in art, his work becoming less and less abstract as he was driven to depict “the common man”.  Fernand Léger also became the Director of two painting schools, namely the Montrouge School and Académie de Montmartre, where, among others, he taught Louise Bourgeois Serge Gainsbourg.

Leger’s love of bright colors, his technique of superimposing various figurative images on top of each other and his admiration for the dynamism of the modern city anticipated the artistic quest of such creators as Robert Rauschenberg, Andy Warhol, Jasper Jones, James Rosenquist, Ellsworth Kelly, Roy Lichtenstein – cult figures of post-war art. 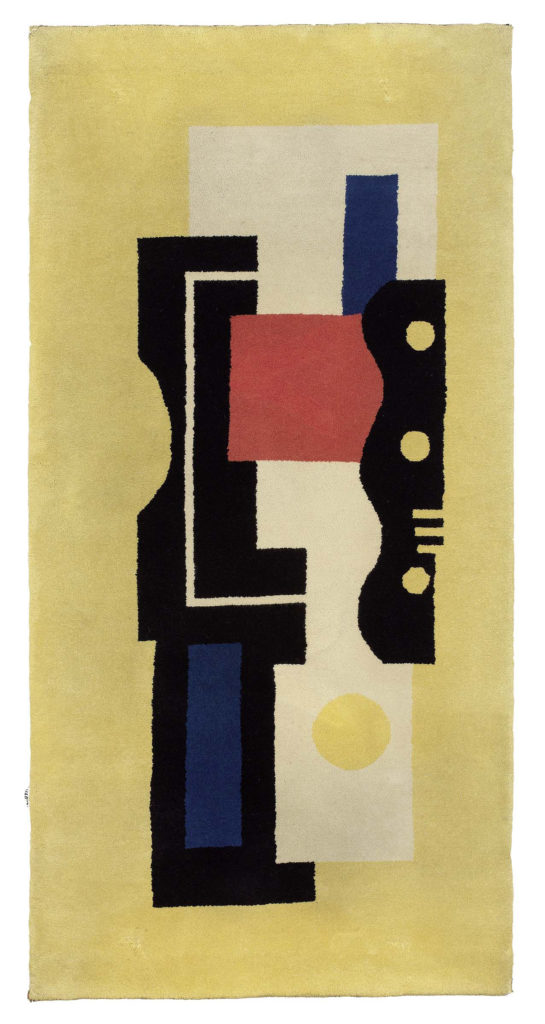