Tom Wesselmann attended Hiram College until 1951 and then studied psychology at the University of Cincinnati. He was drafted into the army in 1952 and, in response, began to draw. He then resumed his studies, enrolling in 1954 at the Art Academy of Cincinnati and in 1956 at the Cooper Union for the Advancement of Science and Art in New York. During a visit to the MOMA, he was impressed by the works of Robert Motherwell and Willem de Kooning. In 1957, he met Claire Selley, also a student at the Cooper Union, who became his model and his wife in 1963. He had 3 children.

Upon graduating in 1959, Wesselman began his artistic career. Wanting to distance himself from the abstract trends in force at the time, he decided to attack the traditional themes of painting, nudes, still lifes, interiors, portraits, etc.. In this way, he tried to get rid of the strong influence of Willem de Kooning in order to find his own way. He thus gave birth to different series, notably the Great American Nudes and the Still Lifes which made him famous.

He used collage and juxtapositions, not hesitating to integrate real objects and borrowings from the history of art within a painting. Although reluctant to use the term, Wesselmann soon became associated with the Pop Art movement, within which he frequently exhibited.

Later, in 1983, Wesselmann came up with the idea of cutting out lines of drawings from metal that could be hung on the wall. These are the Steel Drawings. The drawing lines are cut directly from the steel and often painted. The coldness of the metal contrasts with the flexibility of the lines, often representing nudes. The wall on which the work is hung becomes, so to speak, the paper of the drawing. However, Wesselmann had to wait for laser-cutting technology to be perfected before he could put this idea into practice.

At the end of his life, he returned to abstraction, without denying the figurative aspect of his paintings.

He had his first solo exhibition in 1961 at the Tanager Gallery in New York. Although known and benefiting from major exhibitions abroad, it was not until the spring of 2012 that a retrospective exhibition was devoted to him in North America, at the Montreal Museum of Fine Arts. In 2018, a retrospective is dedicated to him, under the title The Promise of Happiness, at the New National Museum of Monaco (Villa Paloma)2.

In 1980, he published an essay on the development of his painting under the pseudonym of Slim Stealingworth3, a work that helped to make him known, especially in Asia and Europe.

Wesselmann was an avid fan and songwriter of country music. He wrote over 400 songs in this genre. His song I Love Doing Texas With You is part of the soundtrack to Ang Lee’s The Secret of Brokeback Mountain.

He died in 2004 following heart surgery. 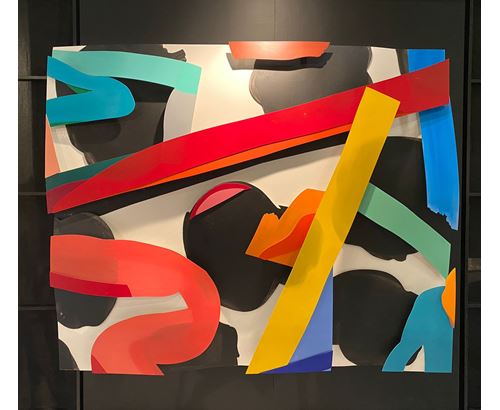